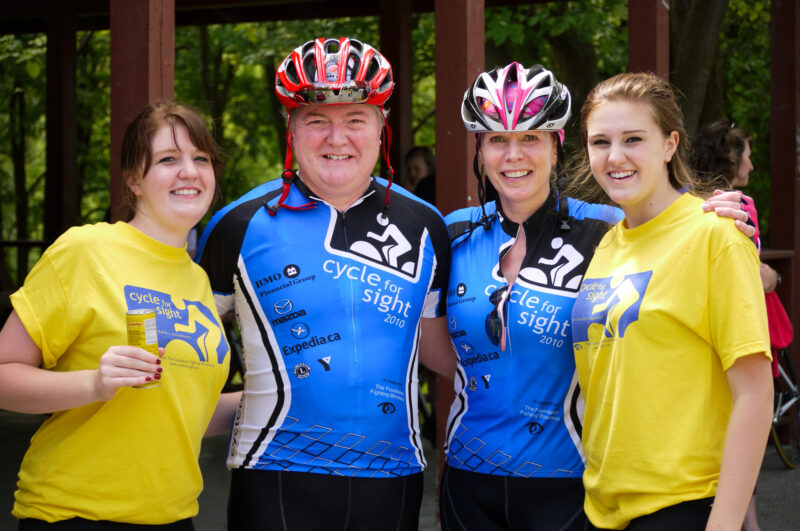 Each year, Cycle for Sight brings together members of the Fighting Blindness Canada community for the perfect one-day ride. From its roots as a “ride-along” part of Ride for Sight, Cycle for Sight has grown into one of FBC’s most anticipated fundraisers of the season, with events taking place from coast to coast. The continued success of this great event could not be possible without its strong community of supporters – and as one of the founding members of Cycle for Sight, Dave Sweeny has seen it grow into the exciting national event it is today.

We sat down with Dave to discuss Cycle for Sight, and to thank him for his years of dedication!

Q: How did you get involved with Fighting Blindness Canada?

I’ve got X-linked retinoschisis (XLRS), so I was always looking for organizations that might be doing some research into my condition. Over twenty years ago, my office held a corporate bowling tournament, and when my team won we agreed to donate the money to charity. I tracked down the Foundation Fighting Blindness (now Fighting Blindness Canada), and we donated. From there, I kept up as a donor. I got involved as a volunteer for the Ride for Sight, then began Cycle for Sight.

Q: How did Cycle for Sight get started?

A: Cycle for Sight began as part of FBC’s Ride for Sight fundraiser. It came about because I’d been a Ride for Sight volunteer, helping to make breakfast for the riders. Someone suggested that I become a “virtual rider” but I didn’t feel comfortable raising money without riding myself, so I suggested that we bike alongside the motorcycles on the route. We had three cyclists in the first year: me, my wife, and my neighbour. My neighbour’s wife drove the SAG wagon. We left four hours early so that we could reach the finish line at the same time as the motorcyclists.

The second year we rode with Ride for Sight, we challenged the GTA Motorcycle Club to see who could raise more money. Whoever raises the most money in Ride for Sight gets to lead the motorcycle parade, so when the team realized we were on bicycles the challenge really heated up. They didn’t want a bunch of cyclists riding everyone out!

Eventually, we had to grow on our own and that’s how Cycle for Sight was born. Someone at FBC put me in touch with Michael Ovens, who was running marathons for charity, and we started Cycle for Sight together.

Q: What was the first year of Cycle for Sight like?

The first year we officially launched Cycle for Sight, we decided to cycle 140 kilometres from Toronto to Collingwood. It was rainy, but we had about 50 participants who were all in good spirits, so it made the day fun. We started out from Downsview subway station and ended up at the Collingwood YMCA. The GTA Motorcycle Club rode us in to the finish line.

From there, the event kept evolving. The first few years we did destination rides, then people decided they wanted to ride a loop. We’ve done different variations over the years.

Q: What kind of logistics are involved in setting up a Cycle for Sight event?

Planning the route can be a lot of work, but at the end of the day it’s a great feeling when people say how great they found it. One of the limiting factors we’ve found has been figuring out a route that doesn’t have dirt roads, which can be difficult for people depending on what kind of bike they’re using. I planned the routes myself in the first few years, but over time I’ve had help.

This year, Peter Rethazy and Charles Wechsler on our planning committee planned the route. It’s a fair amount of work: you have to map out the route using Google, then go up and ride or drive it to make sure the road conditions are good. Then, someone has to mark the route before the event, which is another big job. The riders absolutely loved this year’s routes, and that’s down to Peter and Charles.

The first year we held Cycle for Sight, the township tore up one of the roads along our route the day before the ride, so we ended up with about five kilometres of dirt road that we had to ride in the rain! Luckily, we ended up at the Stayner Lions Club rest stop, and they had a bunch of warm towels waiting for us.

Q: The Lions Clubs have been part of Cycle for Sight from the beginning. Can you tell me a bit more about their involvement?

All of the Lions Clubs we’ve worked with over the years have been fantastic. We reached out to the Lions Club when we were first putting Cycle for Sight together because we knew they had a long history supporting the blind community. It just so happened that there were Lions Clubs about 25 kilometres apart all along our cycle route, so they were perfect places for rest stops. The Stayner Lions Club in particular has gone above and beyond for Cycle for Sight. They’re a great group of people that really roll out the red carpet for us.

You need an army of people to put an event like this together. Drawing on the local community through the Lions Club chapters has really helped us out, and we’re grateful to them for their support.

Q: What has been the most gratifying thing about being part of Cycle for Sight from the very beginning?

I couldn’t have done it without Michael Ovens, because he was the one who got the community together to ride. Every time we go to that starting line and everyone’s got the same jersey on, I’m amazed. The number of participants that are affected by vision loss is remarkable: whether they’re riding with a guide or on tandems, or they’re early enough in their condition to cycle independently, it’s amazing to see how many people are there. You can do something about your own situation, which is really empowering.

I started out with a goal to raise one million dollars for vision research. I figured that was a lot. Now we’ve raised five million, and that’s even better.

Q: What motivates you to continue riding with Cycle for Sight?

When I was diagnosed with XLRS, I was told that my condition could never be treated. They didn’t even know exactly what I had until genetic testing came along. Now, they’re doing clinical trials for my disease. They know exactly what causes it, and they’re on the fringe of curing not just XLRS, but other diseases, too. That’s pretty exciting.

I was diagnosed with XLRS when I was around 14 years old, and they told me I could be blind by 40. Thankfully, my vision has stabilized, but there’s a chance that it will turn up in my daughter’s children. I want to have a cure for my daughters’ kids, if they ever were to need it. That’s why I ride.

Cycle for Sight Ottawa and Newfoundland are taking place later this summer! If you’re interested in joining, please visit cycleforsight.ca

Connect With Us
Search
Recent Posts
Announcing the Winners of the 2021 Research Grant Competition
Screens Off for Sight
What’s new in clinical trials in 2022? A Q&A with retinal specialists Dr. Héon and Dr. Koenekoop
Fight the leading cause of working age blindness … diabetes
BREAKING NEWS … Canadians one step closer to Luxturna Gene Therapy Access
Categories