Diabetes Damage: The Effect On Your Eyes and How to Prevent It 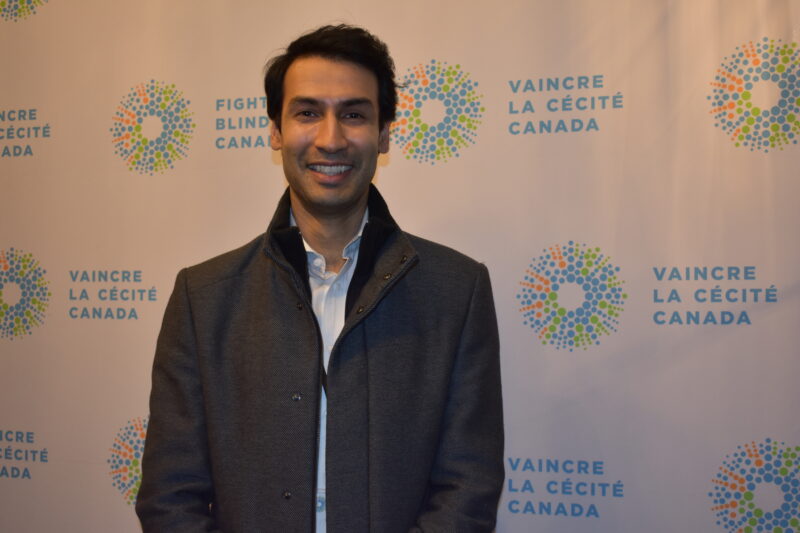 November is Diabetes Awareness Month! At a recent Vision Quest in Calgary, FBC welcomed Dr. Rajinder Nirwan, who shared valuable insight on diabetes and how the disease can affect the eyes. Below, you’ll find an edited summary of Dr. Nirwan’s talk, along with a link to the live recording.

Questions about living with diabetes? Visit our Vision Care Pathway on Diabetic Retinopathy!

Diabetes is a disease that occurs when you have high levels of sugar in your blood. When we eat, we break food down into its component parts, like sugar, and those component parts travel throughout the body via the bloodstream to give energy to cells. However, diabetes occurs when you can’t get sugar out of the blood and into the cells, either because the body isn’t producing enough insulin (type 1), which is a hormone that’s responsible for bringing that sugar into the cells, or because the body is resistant to insulin (type 2).

The prevalence of diabetes is fairly high, not only in North America but across the globe. In 2014, one in 12 people had diabetes and one in two people with diabetes didn’t even know they have it.

We know that the likelihood of developing diabetes increases with age. Within the Canadian provinces, 5.4% of British Columbians have diabetes and 4.9% of Albertans have diabetes. In Newfoundland, 6.5% of the population has diabetes, which is the highest rate in Canada.

Of the 33.6 million people in living Canada, 2.5 million people have diabetes. Of that number, 20% of people living with diabetes have have some sort of eye disease related to diabetes, like diabetic retinopathy, diabetic macular edema, or proliferative diabetic retinopathy. We also know that diabetes is the leading cause of legal blindness in people between 45 and 64 years old.

What can we do to prevent diabetes from impacting our sight?

The most important way to prevent diabetes from impacting your sight is to get screened. If you have type 2 diabetes, you should get screened at least every year, but they may shorten that timeline to 3, 6 or 9 months if you have certain diseases. It’s recommended that anyone over the age of 15 living with type 1 diabetes has their first screening five years after diagnosis.

What does screening for diabetes-related vision loss involve?

Your eye doctor will put special drops in your eyes to dilate them, take a look, and use a special machine called an OCT to look at the individual layers within the retina to see if there’s fluid, which is a sign of retinopathy.

If we see evidence of retinopathy, we’ll diagnose the severity and treat anything that could impair your vision. We’ll also examine your blood sugar levels, cholesterol levels, activity, and diet to make sure that you’re meeting certain benchmarks.

What are the different eye diseases related to diabetes?

Diabetic eye diseases include diabetic retinopathy and diabetic macular edema, which involve swelling in the back of the eye. Other diseases include proliferative diabetic retinopathy and vitreous hemorrhage, where newly formed blood vessels bleed within the eye. This can progress into a diabetic tractional retinal detachment, where the retina detaches from the back of the eye, a condition that would need to be treated surgically.

If you end up with glaucoma or high pressure inside the eye, it could eventually lead to pain and permanent loss of vision, in which case we would remove the eye from the socket.

People with diabetes have a higher prevalence of cataract formation, which is when the lens behind the iris fogs over. A healthy lens is clear, but when a cataract forms the lens becomes cloudy, which causes light that enters the eye to scatter in different directions so you can’t see clearly. People with diabetes have a higher risk of developing cataracts earlier in their life.

Diabetic macular edema causes damage to the blood vessels in the eye, leading them to swell and leak. This causes fluid build-up in the centre of your vision, which causes blurry vision. We can treat this in the form of injections.

We can check for leakage in the eye with OCT scanners, which allow us to look at different layers of the retina. Damage to the retina is visible in an OCT scan.

In its more severe stage, proliferative diabetic retinopathy, new blood vessels grow in the eye. This is because diabetes causes the original blood vessels to leak, meaning that you don’t get enough oxygen to the retinal tissue. To compensate, your eye sends out signals to try and produce new, weaker blood vessels that can actually cause more leaking and fibrosis, which is bleeding in the eye.

The development of these new blood vessels is called neovascularization. These new vessels can scar and contract, pulling on the retina, which can cause a retinal detachment. This would require an operation to fix surgically.

If we don’t take care of these new blood vessels, they can grow all over the eye, including into the eye’s drainage system. What happens when you put a stopper in the sink? The fluid builds up. That same thing happens in the eye. By blocking the eye’s drainage system, these blood vessels cause pressure within the eye to build, which eventually causes pain and permanent vision loss. Eventually that could lead to a surgical procedure called enucleation, where we surgically remove the eye because it’s no longer useful in terms of vision and is just causing pain.

How can we prevent diabetic eye disease?

The most important way to prevent diabetic retinopathy is by controlling your blood sugar levels very strictly. Have good control of your blood pressure, correct your cholesterol levels, and control anemia. We also recommend exercising daily and eating a healthy diet.

Secondary prevention would be an annual eye exam, although some diseases require more regular eye exams.

What treatments are there for diabetic eye diseases?

We inject anti-VEGF by numbing the eye, then injecting the needle off to the side of the eye, so you don’t actually see it. The drug is injected directly into the part of the eye that needs it.

Unfortunately, anti-VEGF treatments only last a few weeks. We don’t want patients to have to come back every month to be treated, so we are working on new treatment modalities that would last longer, or would have a port that slowly releases medication over the course of a few months.

We also do laser photocoagulation, which is a more definitive treatment where we seal off leaking blood vessels individually. We can also perform surgery to remove the blood from the eye. It depends on the severity of the disease and what kind of symptoms and signs we’re seeing in the eye.

What else do I need to know about diabetic eye disease?

There are no early warning signs of eye disease, which is why it’s so important to get your eyes checked regularly if you have diabetes.

Diabetic retinopathy is caused by changes in the blood vessels in the eyes, and laser surgery can halt the progression of diabetes.

Cataracts are more common for people with diabetes.

People who have good control of their sugars can still get eye diseases so it’s very important to get your eyes checked.