Your Gut’s Influence on the Development of Blinding Eye Diseases 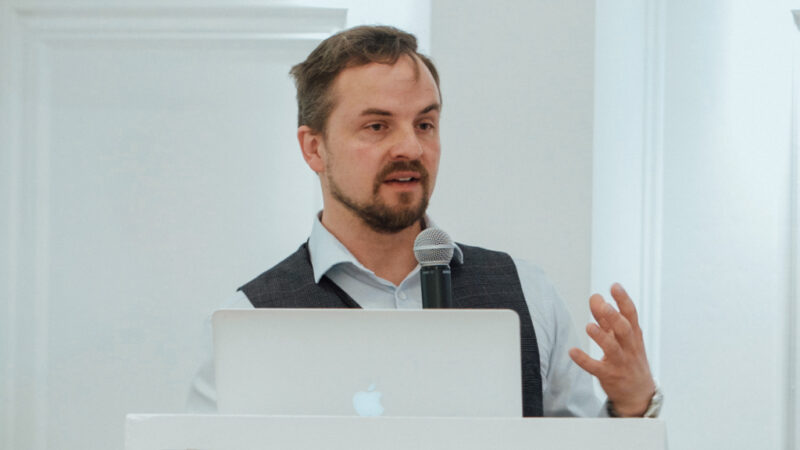 FBC-funded scientist Dr. Mike Sapieha is an associate professor at the University of Montreal. This year, he was the recipient of ARVO’s prestigious Cogan Award, which recognizes an outstanding researcher under the age of 45 who has made significant contributions to vision science. His groundbreaking research investigates the role that gut bacteria play in the development of wet age-related macular degeneration (AMD). This is an account of his presentation at Fighting Blindness Canada’s Vision Quest Conference in Vancouver on April 27, 2019.

Blood vessels are essential for healthy cells – they deliver oxygen and nutrients that keep cells alive and functioning properly. If a tissue does not have enough blood vessels, the body is triggered to make more. These are called “pro-angiogenic programs”. When these programs are triggered in an uncontrolled manner and begin making too many blood vessels in the eye, it can lead to diseases including macular degeneration and diabetic retinopathy.

There are two types of age-related macular degeneration (AMD). The first type is called dry AMD, which is the form that affects 90% of patients with AMD. With dry AMD, lipid deposits in the back of the eye cause a breakdown of photoreceptor cells in the retina. Over time, this can impact vision.

On the other hand, wet AMD, which is the leading cause of blindness for people living with AMD, affects only 10% of the AMD population. Wet AMD causes the neovascularization of the choroid, which means that blood vessels experience abnormal growth in part of the retina. This can cause severe damage to the retina and result in a loss of central vision.

Dr. Sapieha’s work asks the question: Is there a way that our lifestyles could influence the development of wet AMD?

Factors in the Development of AMD

Research conducted on the genetics of AMD has found that the disease is not caused by a single genetic mutation. This means that if you have a genetic mutation, you won’t automatically get AMD, but it does put you at a higher risk for developing the disease.

A common element to most genes that are linked to AMD are their role in inflammation. As average life expectation continues to increase, we are finding that many of the diseases associated with aging—such as AMD and Alzheimer’s—have a profound inflammatory component to them. We can’t modify how inflammation will affect the development of diseases like AMD, just like we can’t modify our age.

However, there are factors associated with these diseases that we can modify: primarily smoking, weight and diet. Smoking is the number one modifiable factor that affects the development of AMD. Weight and diet are more complicated, but they also have a profound impact on whether you’re more likely to develop the disease.

The idea for Dr. Sapieha’s research was influenced by an important study conducted about 20 years ago. The project revealed that if someone without AMD lives long-term in the same environment with someone who does have the disease, they are 70% more likely to develop AMD as well. These results suggest that environmental factors can have a profound effect on the development of the disease.

Some studies indicate there is a link between body mass index (BMI) and AMD. Men who have a BMI of 30 or higher have a higher chance of developing AMD. As the waist/hip ratio increases, the odds of developing AMD increase as well.

Dr. Sapieha’s team worked with mice to test the effects of diet on the development and progression of eye disease. Although it may sound unpleasant, his research involved a technique called fecal transfer. In this procedure a suspension of feces from a healthy individual is transplanted into the gut of an individual affected by disease. This transfer changes the composition of the bacteria in the gut, and affects not only gut health, but many other systems in the body, too.

In fact, there is a long history of using fecal transfer as a medical treatment. As early as the fourth century B.C.E., a Chinese doctor used fecal suspensions as a treatment for food poisoning. More modern studies show that the cure rate for C. difficile jumps from 31% to 94% when using fecal transfer in place of current IV antibiotic treatments. Dr. Sapieha wanted to examine how changes to the environment of the gut could affect conditions in the eye—particularly in the development of wet AMD.

To examine this question in the lab, Dr. Sapieha’s team fed mice a high-fat diet (HFD) until they were obese. When these mice were given a glucose tolerance test the results indicated that they were diabetic or pre-diabetic. They then took a suspension of the feces of a healthy mouse and injected it into the gut of the obese mouse. After this treatment, the HFD mouse responded to glucose the same way as a healthy mouse. This indicated that there was something in the fecal suspension that can influence metabolism.

It is estimated that there are 500-1,000 species of bacteria that exist in the human body at any one time, and that human bodies contain 1.3 bacterial cells for every one human cell. Due to their sheer number, bacteria play a tremendous role in human health and influence the development of many diseases such as inflammatory bowel disease, different types of cancer, type 2 diabetes, obesity and metabolic syndrome. Some diseases of the brain (and retina) are also affected by the health of our gut biomes.

We also know that gut microbiota are rapidly modifiable. For example, if you start to eat a plant-based diet, within four days your gut microbiome will be very similar to that of a vegetarian.

What Did Dr. Sapieha’s Study Find?

Next, the researchers used a laser on the retina to simulate AMD. The mouse that was fed a high fat diet showed a high level of choroidal neovascularization – that is, uncontrolled blood vessel growth consistent with wet AMD. However, when antibiotics were used to change the microbiome of the gut so that the bacterial composition resembled that of a healthy mouse, they saw significantly fewer of these pathological blood vessels.

The most significant result of the study was that the mice on a high fat diet developed a condition called “leaky gut”. When this happens, the gut becomes very permeable and bacteria that normally live in the digestive tract leach out into the bloodstream and circulate throughout the body. Consequently, this activates an inflammatory response that can lead to diseases like AMD.

When Dr. Sapieha’s team transferred healthy mice feces into HFD mice they were able to significantly reduce the number of diseased blood vessels in the eye. They also were able to reduce the amount of “leaking” from the gut. This indicated that there was something in the bacteria from the obese mice that was causing leaky gut and aggravating inflammation in the retina.

So, mice on a high fat diet show an increase in certain kinds of bacteria that cause leaky gut. That bacteria then seeps into the bloodstream and aggravates the immune system. If someone has the genetic markers that predispose them to developing AMD, this increase in bacteria can lead to the development of the disease.

It is important to note that fats are not all bad. In fact, there is evidence to suggest that good fats, like Omega 3s, may have a protective effect on the eyes. This study does not endorse one particular type of diet. Rather, it concludes that it is important to have a healthy gut, which influences many processes and diseases associated with aging.

Dr. Sapieha’s research raises many questions, which means that there’s much more work to be done to increase our understanding of the link between gut microbiota and its effect on eye diseases. Future research questions include:

We are proud to be funding Dr. Sapieha’s important research! Thank you to all the Fighting Blindness Canada supporters who make this work possible. We will be sure to keep you posted as his team makes progress in their research to understand why and how eye diseases like AMD develop—and ultimately to make innovative sight-saving treatments a reality.

This is a recap of Dr. Mike Sapieha’s presentation at Fighting Blindness Canada’s Vision Quest Conference in Vancouver on April 27, 2019. For more information about Dr. Sapieha’s work, please click here.